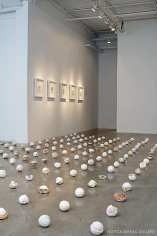 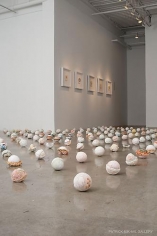 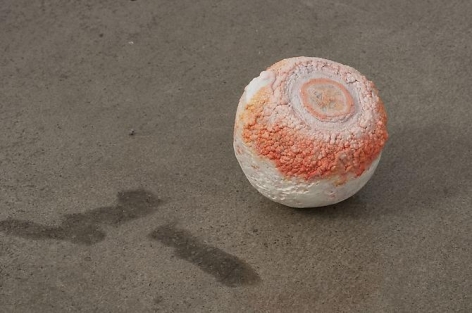 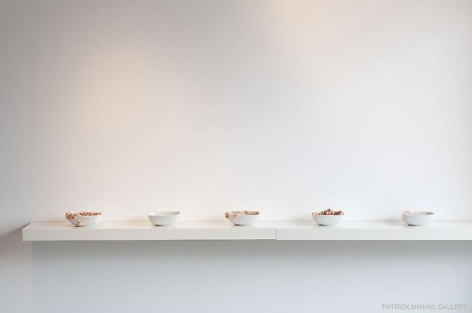 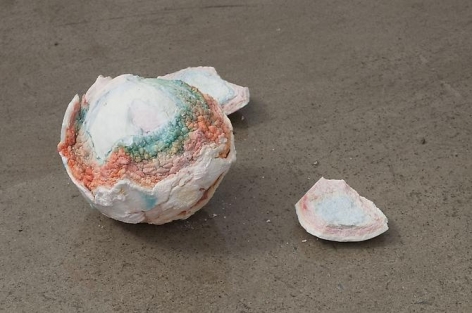 Deborah Margo is not interested in grand events, or in monuments to commemorate them. Instead, she finds wonder in the everyday and in the task of tracking time. Small events are to be followed despite the constant reminder of our insignificance. She achieves this by using a wide array of materials and forms, questioning the boundaries of a two- and three-dimensional world.

In 2006, Ms. Margo completed Giant Okeydokes 20085, a work that established a field of similarity and difference, consisting of one hundred balls, each two inches in diameter. Using compressed sugar ball forms, their underlying structures were exposed as irregular outer corrosions—the result of being previously immersed and stressed in water.

In 40019’s CEASELESS TRANSFORMATION, the artist has continued working with impermanent materials—including the compressed sugar ball forms—this time expanding both the number of forms and their scale. The installation is an opportunity to overtake a space yet allow for a subtle experience, inviting the viewer to discover its poetic and non-didactic complexities. Multiple elements are unfixed, to be found on the floor yet inviting the hand. Though Ms. Margo sees 40019’s Ceaseless Transformation as an extension of Giant Okeydokes 20085, it has also allowed for new investigations, which include submerging the sugar balls in varying amounts of water, cutting them open, then working their inside exposed surfaces using the same extended sanding methods for finishing carved stone. Varying states of decomposition sit side-by-side with the precision of rings of colour found in the uncovered inner cores. Miniature planets, pieces of day- glow lava, fossils, tree rings, geological specimens—the visual associations shift and multiply as do the references to such different works of art as Eric Cameron’s “thick paintings” or Claude Tousignant’s “target” paintings.

For more than twenty years, Deborah Margo’s art practice has combined a variety of disciplines including sculpture, painting, drawing, photography, and ephemeral installations, questioning the contextual identities of public and private spaces. These ideas have been effectively investigated in the solo exhibition Castings, curated by Emily Falvey which first traveled to the Owens Art Gallery at Mount Allison University in Sackville, New Brunswick then to the Ottawa Art Gallery. Her work has also appeared in numerous group exhibitions including Creative Activism at the Toronto Free Gallery; Evidence: The Ottawa City Project at the Ottawa Art Gallery; Once Removed at Modern Fuel Gallery in Kingston, curated by Gjennifer Snider; and Conex-Us: Art-O-Retts, curated by Donna Wawzonek at the Mendel Art Gallery in Saskatoon. From September to December, 2008, Ms. Margo appeared with Montreal artist Devora Neumark in the collaborative performance project Why Should We Cry? Lamentations in a Winter Garden at DARE-DARE Centre de diffusion d’art multidisciplinaire de Montréal. Later in 2009, she will be exhibiting her work at Calgary’s Truck Gallery with Eric Cameron, recipient of the 2004 Governor General’s Award in Visual Arts.

Ms. Margo earned a B.F.A. from Montreal’s Concordia University and an M.F.A. from the Tyler School of Art at Temple University in Philadelphia. In addition to maintaining a vibrant professional practice and exhibiting in Canada, the United States, and Mexico, she is a faculty member in the Department of Visual Arts at the University of Ottawa where she teaches drawing, painting, and sculpture. She has written about the visual arts for a number of media outlets and publications including Border Crossings magazine.

Deborah Margo gratefully acknowledges the support of the City of Ottawa in the production of 40019’s Ceaseless Transformation.