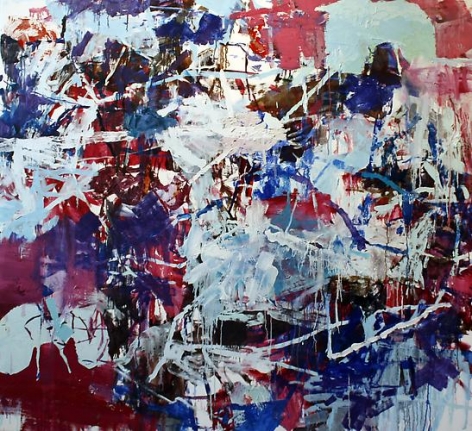 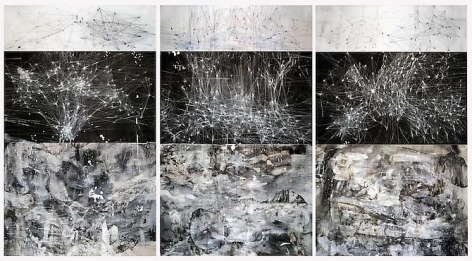 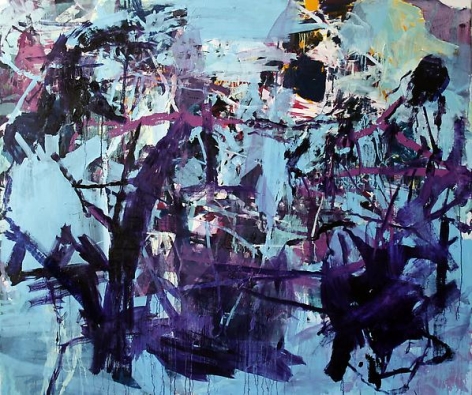 
PATRICK MIKHAIL GALLERY is pleased to present INTERFACE, an exhibition of new work by conceptual sound artist DONNA LEGAULT, and painters AMY SCHISSEL and ANDREW SMITH. In the exhibition, the three artists explore the common boundary or interconnection between their professional practices, as well as systems of drawing, painting, and digitization where the object or the technology itself is the mediator between the work and the viewer. The exhibition comprises a site-specific sound installation by Legault, and new paintings and works on paper by Schissel and Smith that “interface” with each other to investigate how the surface of each work draws on the language of digitization and refers to the modes of representation used in digital/computerized screen interfaces.

DONNA LEGAULT
Donna Legault is a conceptual sound artist working in the field of electronic art, sound installation, sculpture, and performance. The intersection of these practices find focus in the resonance of sound as a dynamic extension of everyday actions. Her interest in the perception of sound and touch draws participants’ attention towards the relational qualities of “noise” as a material and temporal presence. Donna Legault has a Bachelor of Arts in Art History from Carleton University, and a Bachelor of Visual Arts from the University of Ottawa. She has exhibited widely in solo and group presentations at Ottawa City Hall Art Gallery; AXENEO7 in Gatineau; Gallery 115 at the University of Ottawa, Espace F in Matane, Quebec; Maison de la Culture in Gatineau; Karsh Masson Gallery in Ottawa; InterAccess Media Arts Centre in Toronto, Electric Eclectic Festival in Meaford, Ontario; and at PDCON Exhibition space in Berlin, Germany.

AMY SCHISSEL
In her most recent work CYBERFIELDS, Amy Schissel continues her ongoing pursuit to address the progressively dematerialized quality of our data driven and media saturated culture within the realm of abstract painting. Whirling schemata, concentrated notational systems, and web-like linear structures negotiate hybrid moments where paint and modes of digital representation collide. These systems, frenetically layered to visualize the largely invisible information flows that cut across cities, hover over continents, and seemingly negate the need of geographical location for human interaction and communication. Her works are an imaginative reinvention of our contemporary landscape and have become a means to re-insert a sense of civic legibility where the World Wide Web calls us to be everywhere and nowhere at once. Amy Schissel was a finalist in the 2011 RBC Canadian Painting Competition. Her work can be found in the collections of the Canada Council Art Bank, the Department of Foreign Affairs Canada, the Free University of Brussels, Belgium, and the Gotland Museum of Fine Arts, Sweden, in addition to numerous private international collections. She completed her BFA in 2002 from the University of Ottawa and her MFA from the University of Ottawa in 2009. She was Canada’s 2009 recipient of the Brucebo Fine Arts Award, and has exhibited both nationally and internationally, including solo exhibitions at the University of Brussels Gallery, Belgium; Karsh Masson Gallery in Ottawa; and Centre d’art Imagier in Gatineau, Quebec. She is the recipient of various grants and awards from the Canada Council for the Arts, Ontario Arts Council, and City of Ottawa.

ANDREW SMITH
Andrew Smith’s paintings are the result of an attempt to physically embody a line of communication that could be given by the language of movement. The parameters of this movement are oriented by the question of how to make a painting that can have an open dialogue with the representation of its subject matter. Central to this concern is the way in which a viewer could be involved in an active manner in the experience. In his work, Smith potentially constructs a metaphorical interface between the emotive and sensorial experience of making, and the manifold of significations that can be made by a viewer. What actually happens in making each painting, motivated by the construction of a system of marks or the configuration and jostling of shapes, presents its own order from which it may extend a conveyance that does not mimic but mixes with an experience. Andrew Smith has a Bachelor of Fine Arts and a Masters of Fine Arts from the University of Ottawa. He has appeared in numerous solo and group exhibitions including Ottawa City Hall Art Gallery. His work can be found in private and public collections including RBC-DEXIA, London, U.K.; and the Department of Foreign Affairs, Canada.